Want a fabulous new cuff bracelet?
Want to make it yourself?
The official release for this pattern is at Quilt Market next month, but it happens to in the pattern shop already (in case you want to get the jump on it).
And let me just tell you...these are SO FUN to make!
Plus, they are fast and easy.
A little wool, a cute cotton print, a button, some bling, and 30 minutes.
Seriously!
I cannot stop making them.
I even ordered a monster pack of Swarovski crystals so I could make...oh I don't know...one (or five) for every single person I know.
Seriously!
And, I might just say that it is never too early to start on Christmas gifties. Your people will love you! 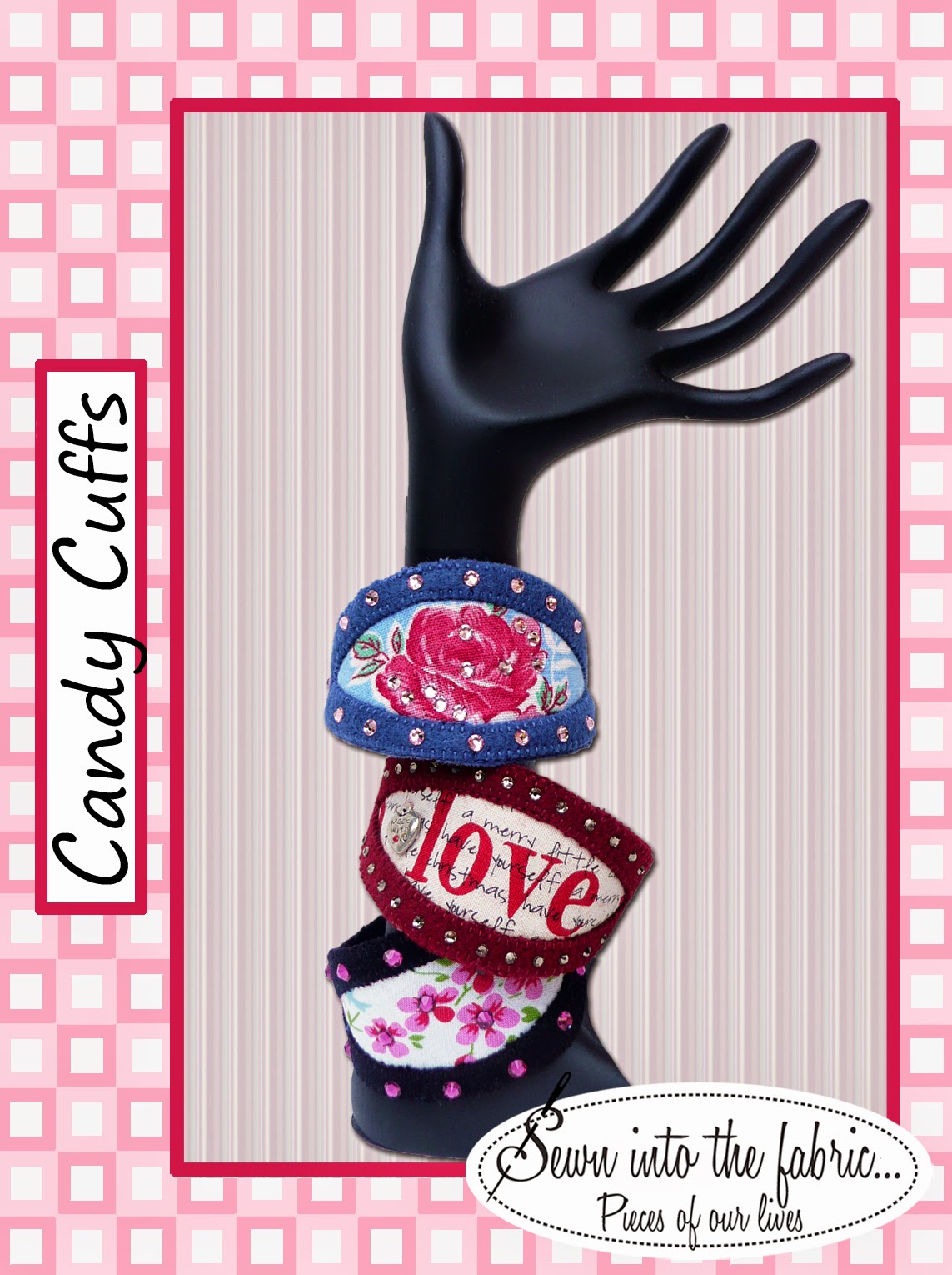 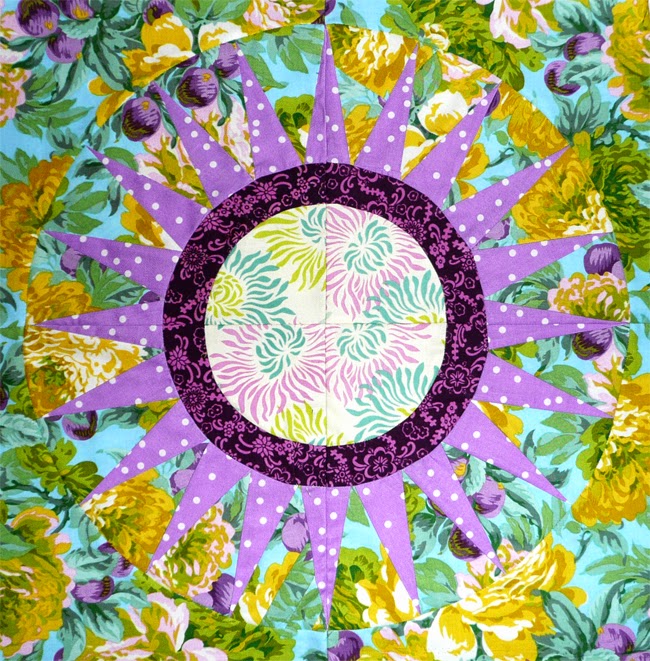 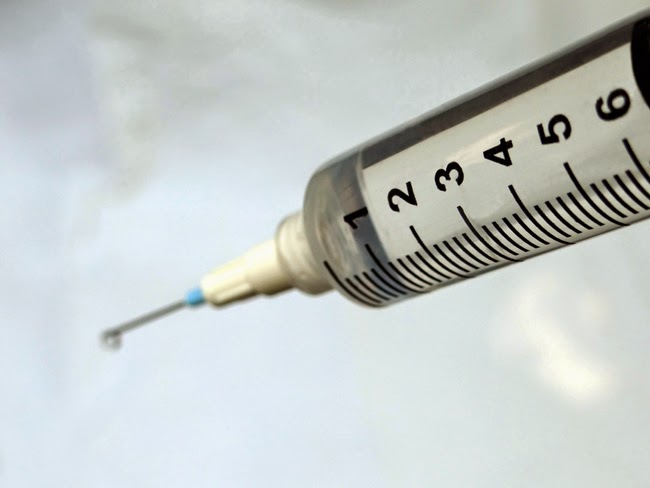 Whole New Mom has posted an opinion on her blog about the current vaccine debate. It is short and well written and gets down to the actual meat of the matter: parental rights vs states' rights. It is a slippery slope, to be sure, and one that we need to be VERY mindful about.
I hope you will take a minute to read her post, and you can link over to it from here:
“No Vaccines? No Benefits!” How Australia’s Alarming New Policy Affects You

And just to be perfectly clear, yes, I think childhood vaccinations are very good. But I do not support the incessant and relentless stripping away of our freedoms.
Posted by Rana at 06:59 No comments:

This project is finally finished, and to be honest, I am sorry to be wrapping it up. 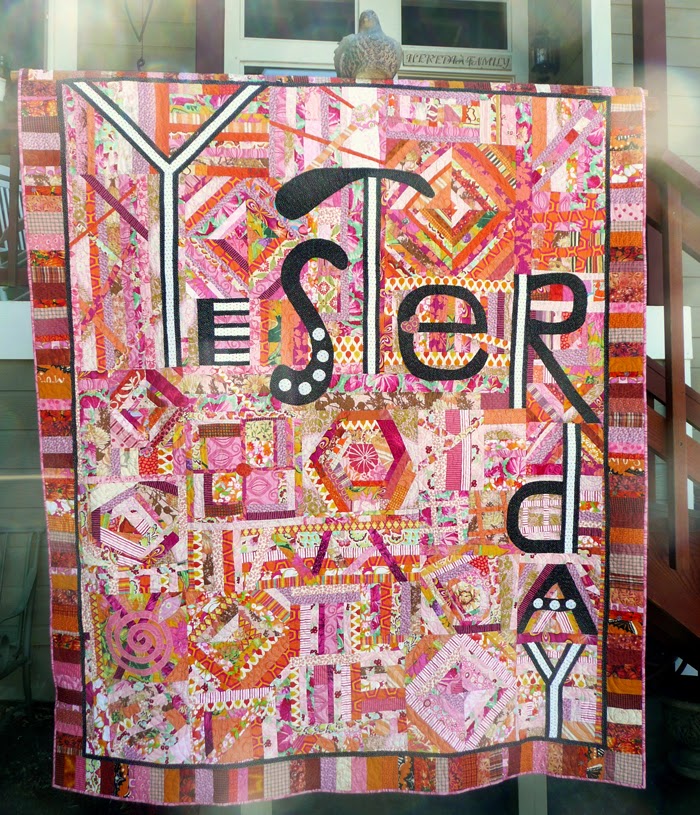 The wind and the sun added such character to this picture!
If you are a regular blog reader, you already know that this quilt was inspired by the pattern "Madness"  written by Kathy Doughty of Material Obsession. But what other inspirations did I bring to the process.

Color: inspired by a wedding quilt I made last year for friends.
Fabric: the scrap basket.
Size: I ran out of orange and pink scraps.
Yesterday: this began as nothing more that happenstance. The first two blocks I made are the two in the top left corner. I had been imagining a zigzag row, but after I put the two blocks together I could only see the letter Y. So, being an improv quilt and all, I decided to go with it and I stitched together the big Y.
Also of coincidence, I had started this quilt just a few days before my birthday, and I had been spending a lot of time strolling down memory lane. Those 2 things just kind of blended together and the Y became Yesterday which, in turn, became the focus of the quilt. Finally, I took the time to write out a little list of all the things that had been on my mind so that I could use it as part of the label. In part it reads:

YESTERDAY...
…I was only 40.
...the big challenge of the day was getting 2 babies to nap at the SAME time.
…we lived in a teeny tiny apartment with a lot of doors.
…I had never made a quilt.
...I held my brother’s hand as he died.
…I had a red, white and blue bike with a banana seat and streamers.
…I was 18 and mad at the world (and my mom).
…my little girls couldn’t cross the street without a hand to hold.
…we made payments on my first $100 sewing machine.
…my mom grew tulips in our front yard.
…we would ride our bikes to the park and watch the train go by.
...I had no gray hair.
…we had unauthorized picnics on Sundays afternoons in the backyard while waiting for escrow to close on our new house.
…we drove all the way to Alaska.
…I was a college student.
…I thought I was not artistic.
…I had uterine cancer.
…we hiked Half Dome and Glacier Point in Yosemite National Park
.…I started a business.
…I joined my first friendship circle.
…I was afraid of the dark.
…I drove a blue-green Chevy Suburban with barn doors and V8 power.
…I attended my first International Quilt Market.
…we visited NYC for the first time, and saw Phantom of the Opera on Broadway.
…I married my friend.

Yeah, another Color Me Happy sighting!
This one was made by my friend Linda H. Isn't is wonderfully fresh and modern looking?! 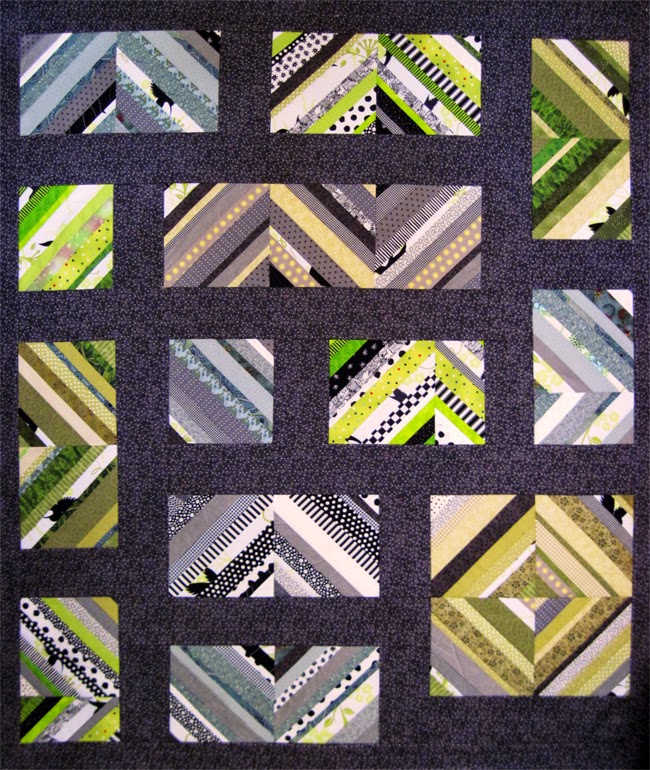 If you have finished any of the patterns from my book, I would love to see (and share them)!
You can reach me by email at rana@sewnintothefabric.com.
And if you need a copy of the book, you can get one HERE.
Posted by Rana at 08:39 No comments:

I think we have already established my love of QAYG (quilt-as-you-go).
I currently have 2 different projects in the works that are being assembled with 2 different QAYG techniques.

The first one is to sew a block in the traditional way. Then layer and quilt it as desired. Square it up. And finally, use a baffling technique to attach it to the next piece, which in this case is sashing.

The second technique involves building a block right on the batting. Then layering on the backing and adding the desired quilting. Squaring it up. And lastly, "setting" the blocks with 1" sashing (which is just enough to cover the seam allowances. 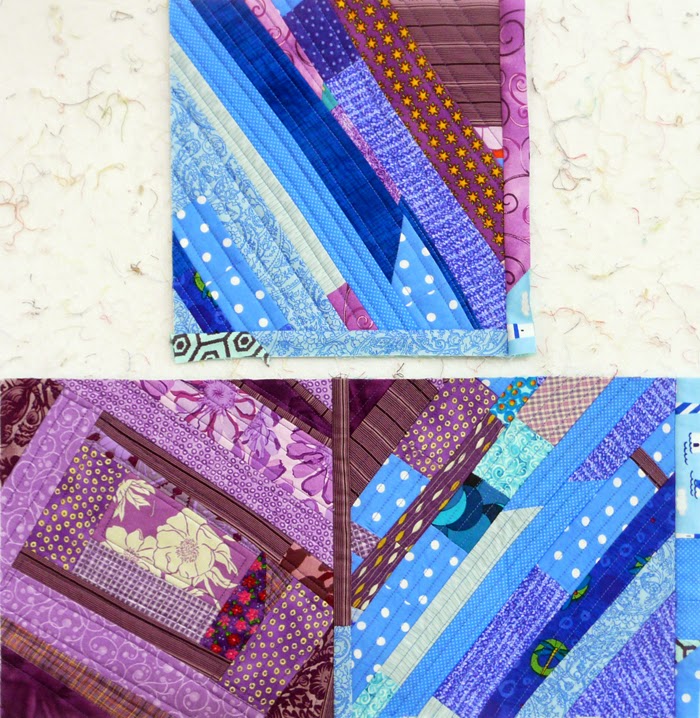 What about you...do you have a favorite QAYG technique?
Posted by Rana at 06:30 No comments:

A Day at the Zoo

My daughter and I made a day trip to the Fresno Chaffee Zoo.
Here are a few of the animals we saw... 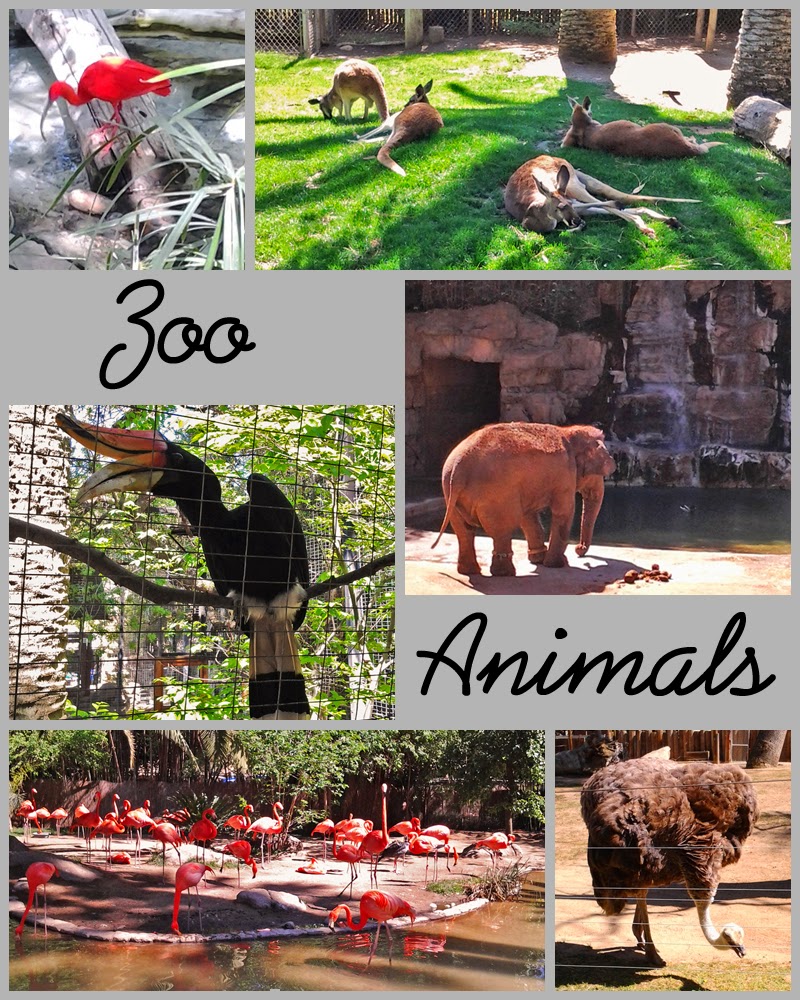 And here is how we recorded them for posterity... 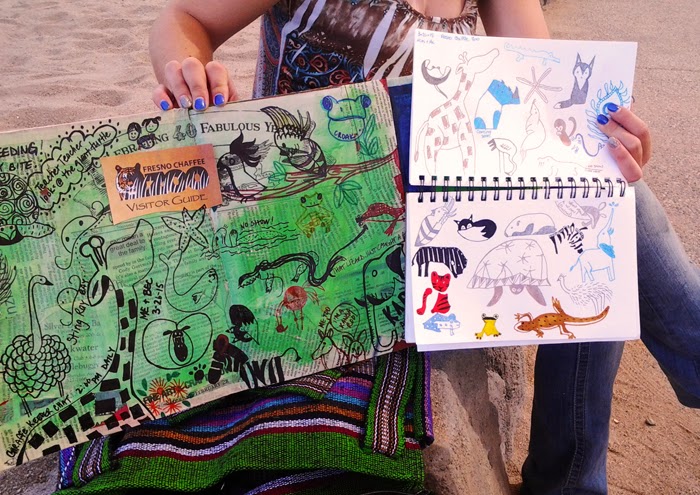 Well, I guess they won't win any awards, but we did have a really fun time hanging out together and giggling about our artistic renderings.
Posted by Rana at 07:43 2 comments:

One of my favorite people just turned 3.
This is the almost finished version of the improv quilt that I made for her (I forgot to get that final picture) with three of everything. 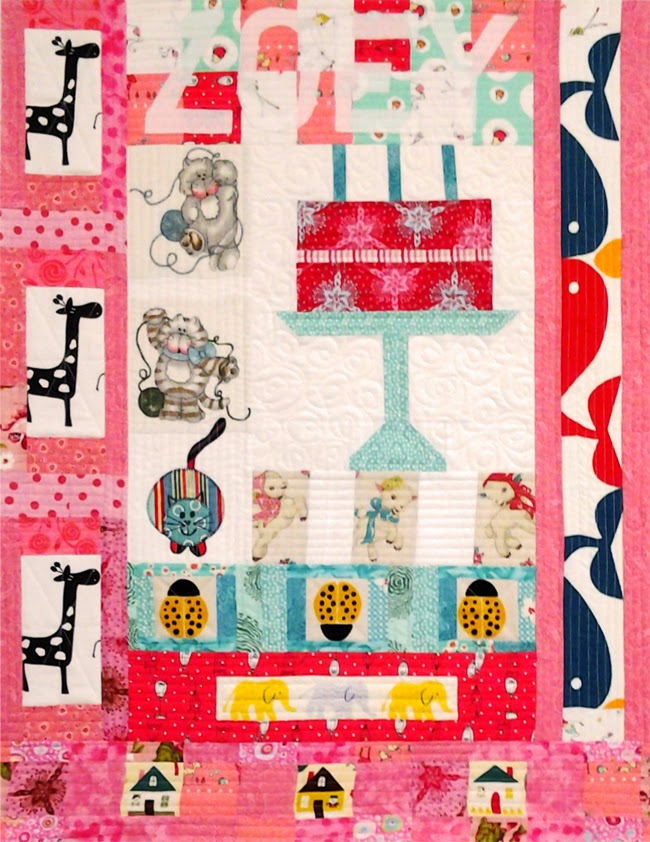 I am still obsessed with making pattern repeats!
I finished the skillshare class I told you about. Then I took a second class, signed up for a third (that I am almost finished with) and I am also in the midst of a fourth on creativebug.

It is CRAZY!! I should also mention that I have exactly ZERO time to be doing all of this (Spring Market is all of 5 weeks away), but I cannot stop myself.
Here are a few more little samples. 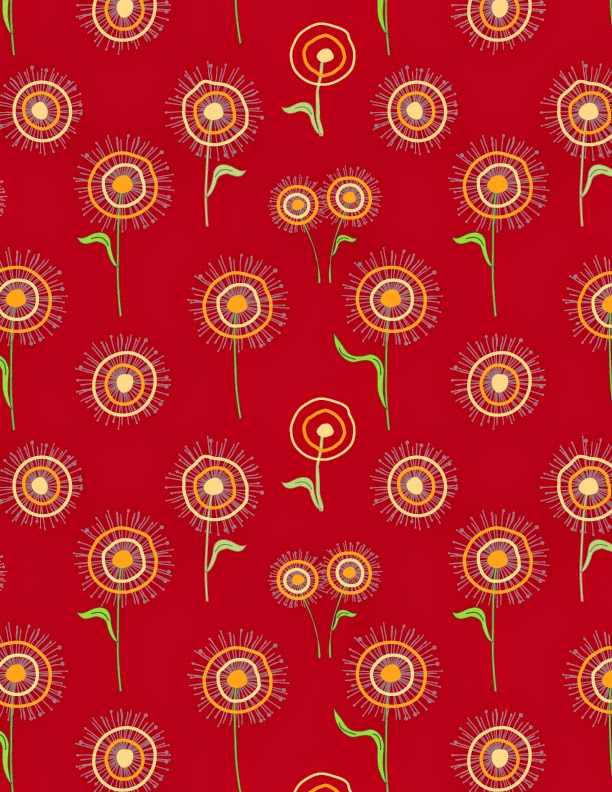 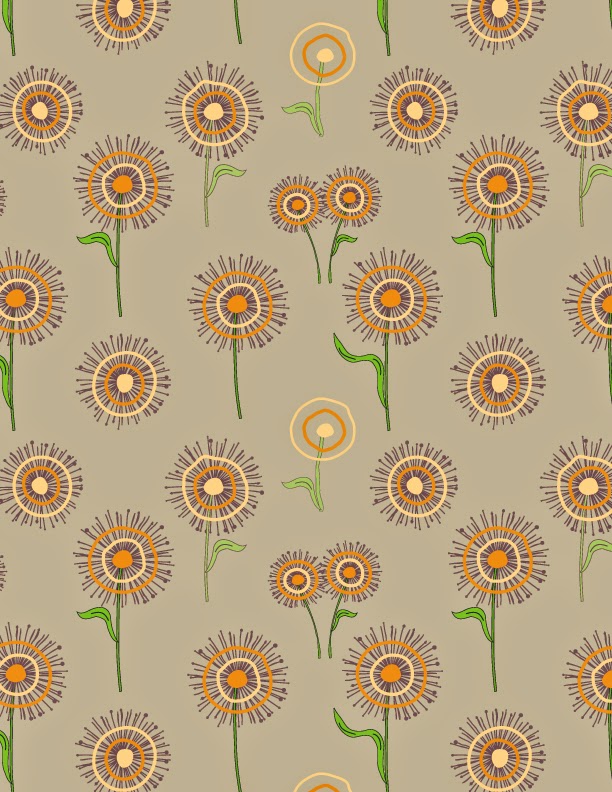 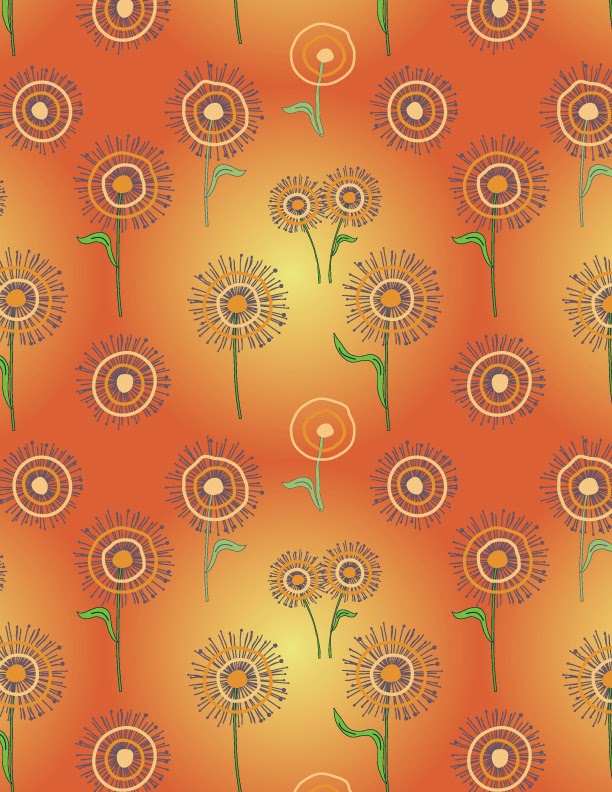 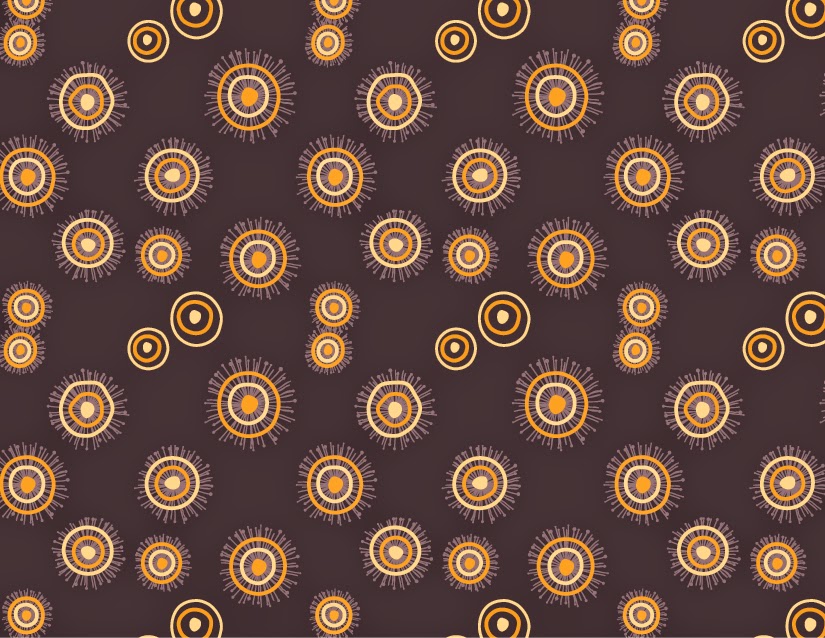 Now if you are interested in trying this yourself, you can join skillshare for free for one month (use the link I gave you in the previous post about repeats) or you can buy a membership at creativebug.com. Both will be well worth the investment.
Posted by Rana at 07:41 1 comment: 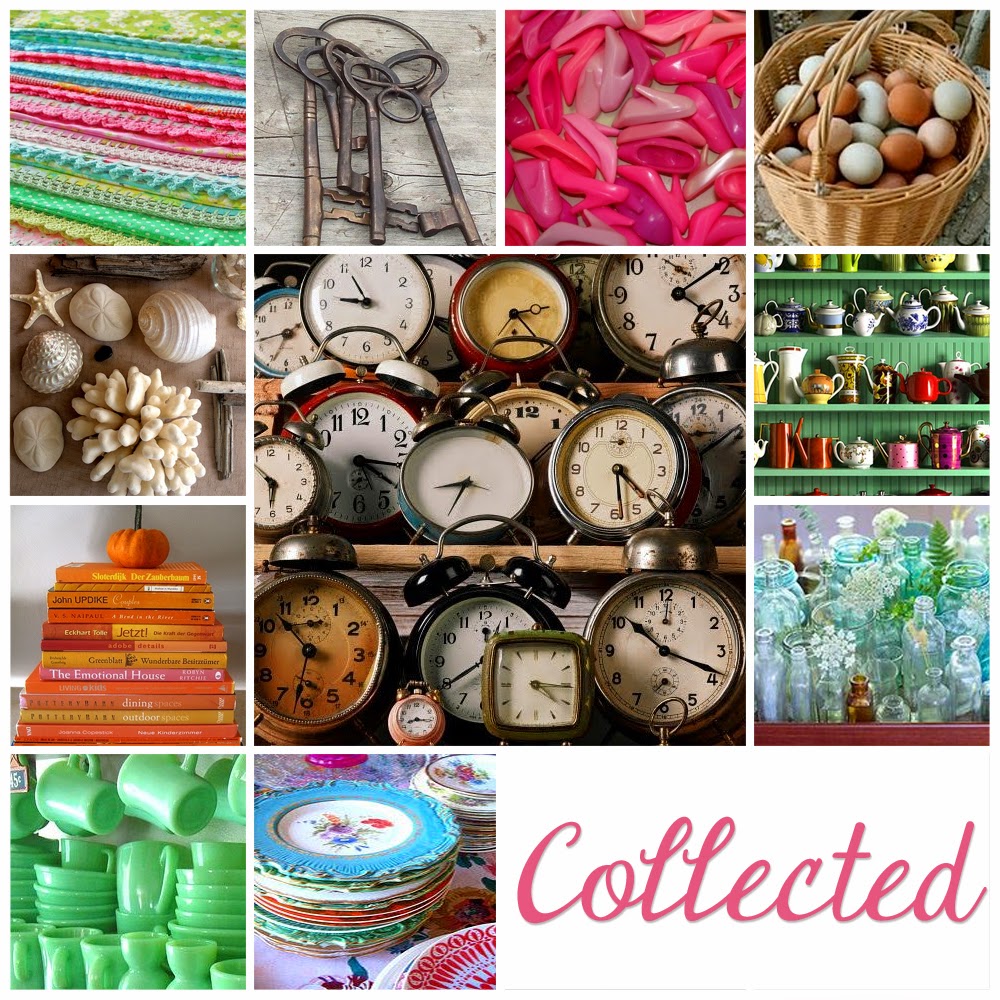 A collected mood board for April. Let yard sale season begin!
This mood board was designed using a template that I created in Photoshop.
That template is available as a free download, along with lots of other goodies,  for newsletter subscribers.
If you are interested you can subscribe here.
Posted by Rana at 05:00 1 comment:

Hello and welcome to my little blog. I hope you find some quilting inspiration while you are here. And maybe a bit of humor, a gardening tip and a good recipe too! Read more about me here.